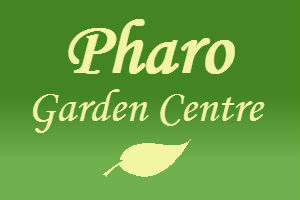 The Ruby Throated Hummingbird is the only hummingbird species that breeds in eastern North America. John James Audubon described the Ruby Throat as "this glittering fragment of the rainbow" and indeed we feel euphoric when we spy a bright green flash of feathers at our feeder.

Spring migration generally begins in March, lasting through April into May with the male arriving first. Male and female will stake out their own personal territories and vigorously defend their nectar sources against all threats.
After mating, the males flies off, his responsibilities having ended.  Mrs. Hummingbird feeds and defends her babies and nesting area. She generally raises two broods a summer in her tiny 2" by 2" nest, mostly with 2 eggs in each.
Hummingbirds expend copious amounts of energy as they fly 25 to 35 mph. around their garden areas patrolling, defending, and feeding on flower nectar and numerous small insects, spiders, gnats, flies, which they catch in flight. The females wings beat 50 times a minute, the males 70.  Their wing muscles make up to 30% of their total body weight and they can be turned 180 degrees up or down.

It is important to put your nectar feeders up early in the season and leave them up even after you no longer see birds in the Fall. Hummingbirds do not all migrate at once in either Spring or Fall insuring better food supplies for all these long distance travelers. If you feed your guests well, you may find the same ones at your feeder again next year. 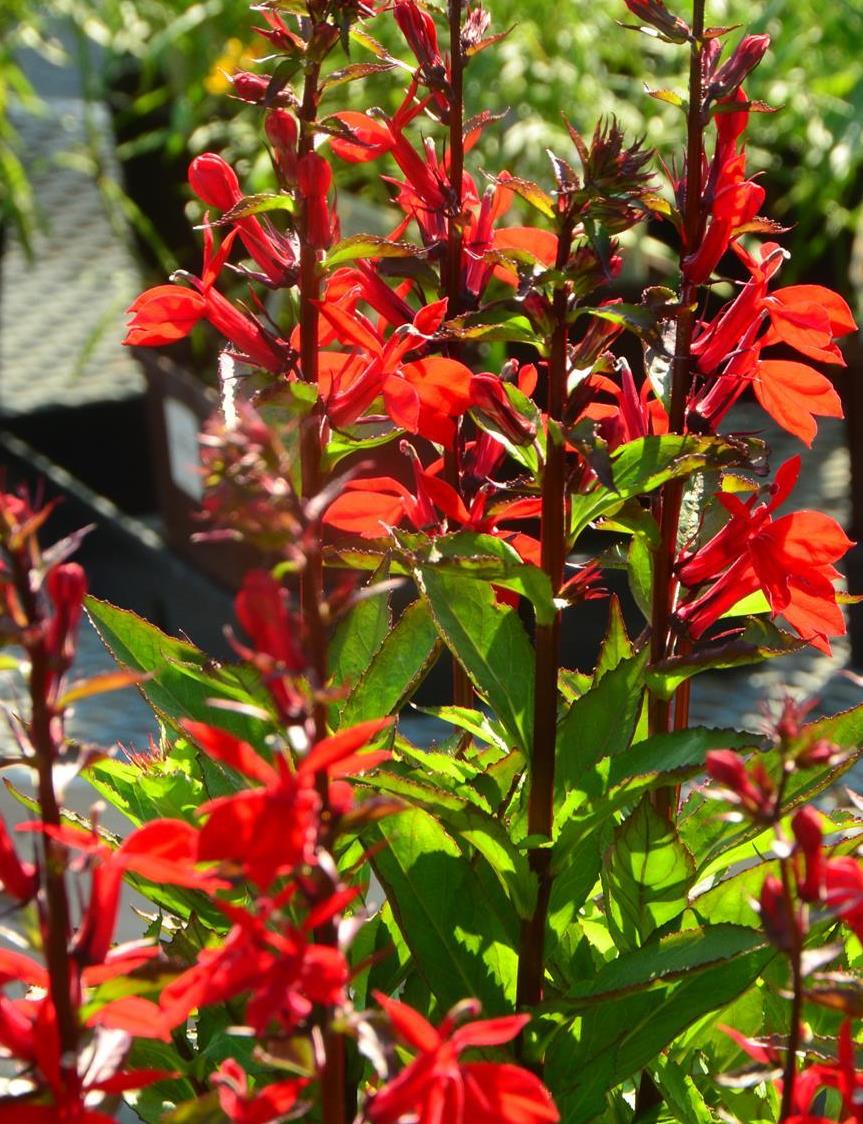 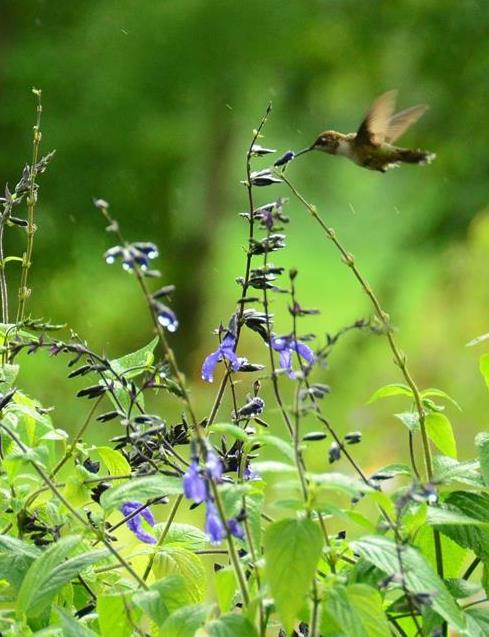 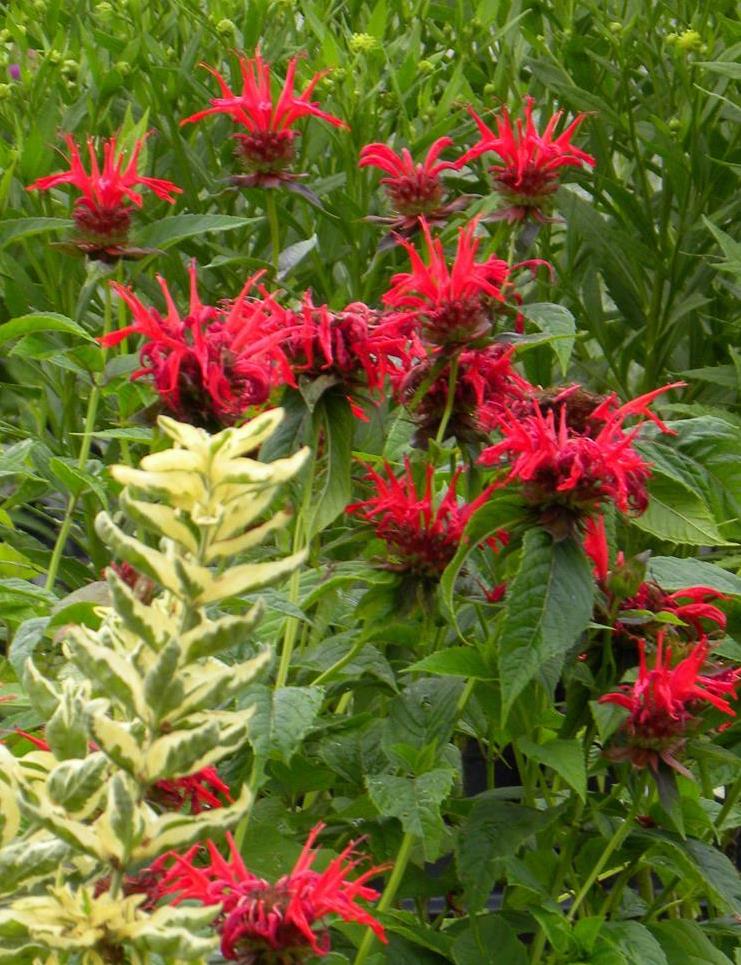 Red or blue flower spikes from July to September.
Height to 36".  Adaptable to many sites but moist soils are essential.
Prefers part shade.
Deer resistant.
BLACK AND BLUE SALVIA
(Salvia)

This one has a rich blue flower irresistible to hummingbirds. There are also many other great salvias for nectar.
Height to 48".
Prefer sun but tolerates light shade.
BEE BALM
(Monarda)

Blooms red, pink, or purple in July and August. Tolerant of many soils. A member of the mint family with fragrant leaves. Used as a medicinal plant many Native American Indians. 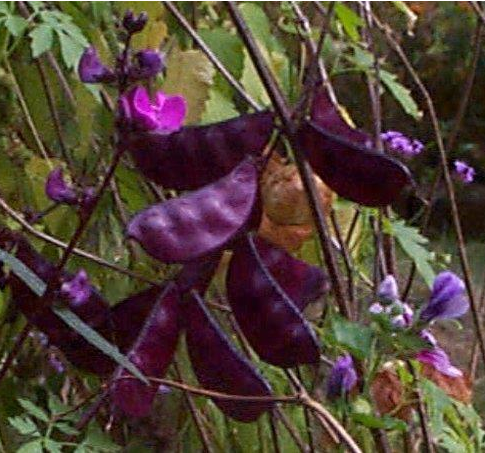 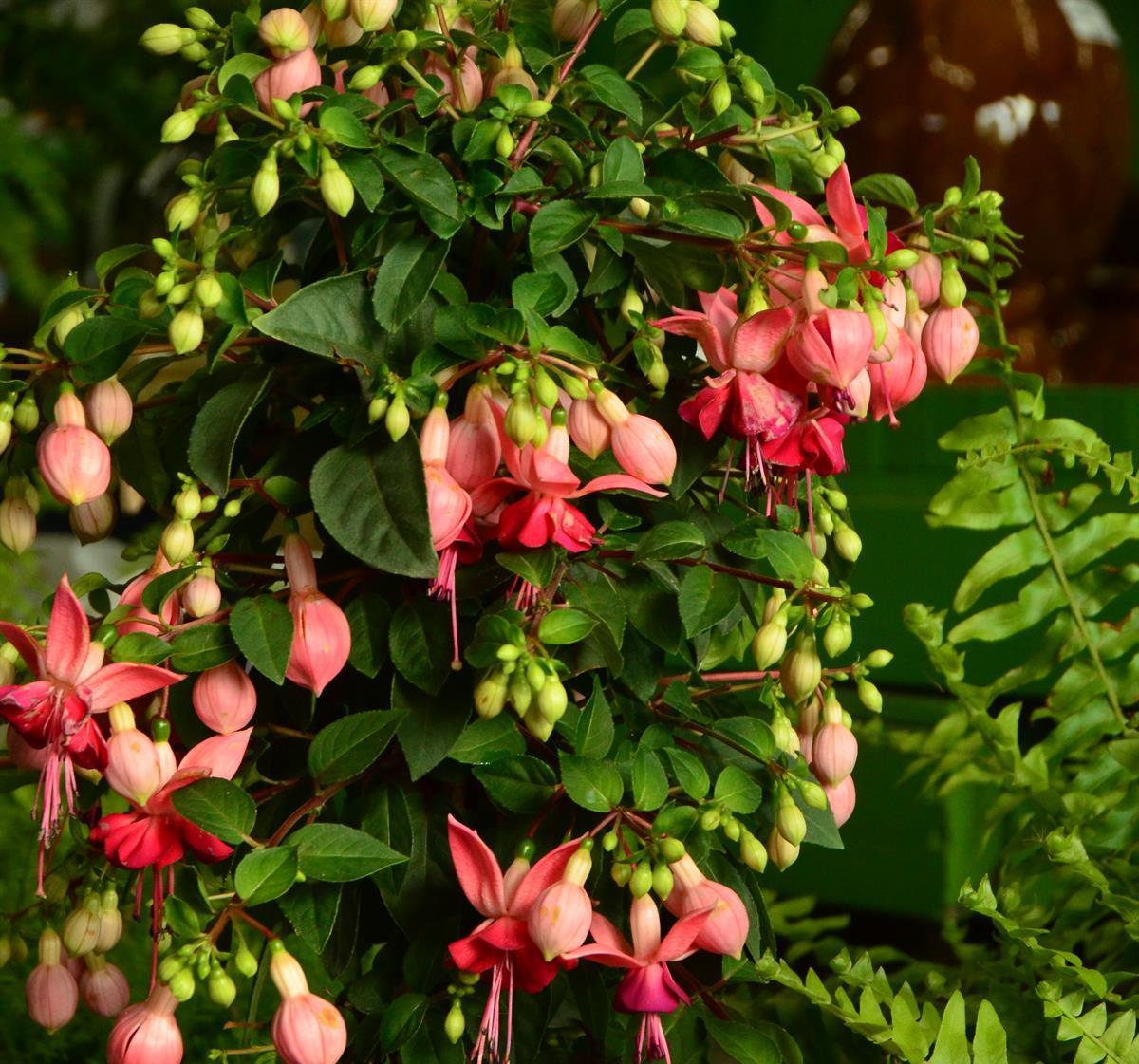 Blooms are purple or white all summer until frost with many small flowers on a raceme.
The plant is a twining legume and can climb 10". The fruit is bright purple.
Not particular of soil.
Plant in full sun.
FUSHIA
(Fushia)

Blooms are many colors, purple, pink, and red, solids and bicolors.
Height variable as the plant has weeping and  upright forms but generally 12" to 36".
Likes fertile soil, evenly moist, and shady site. 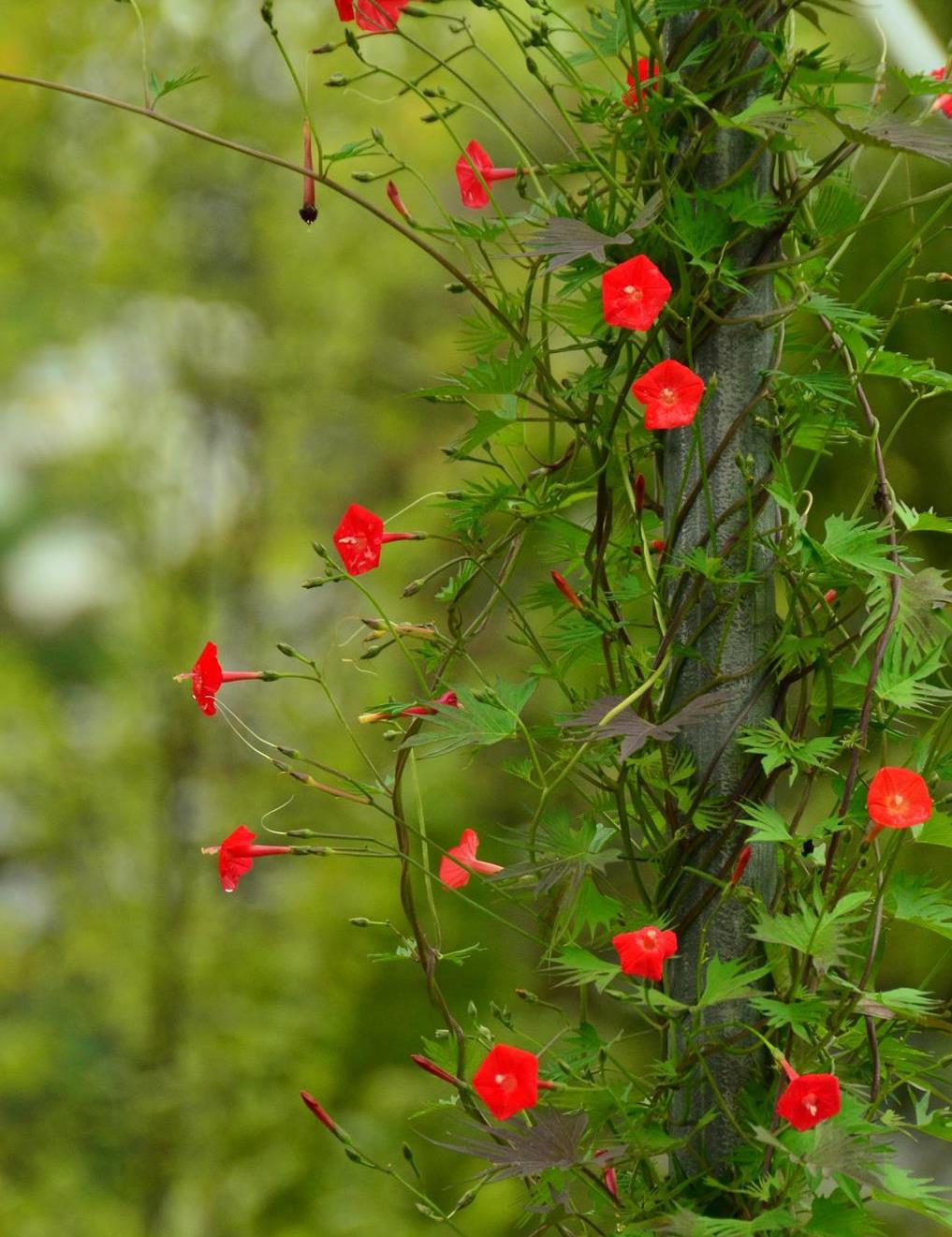 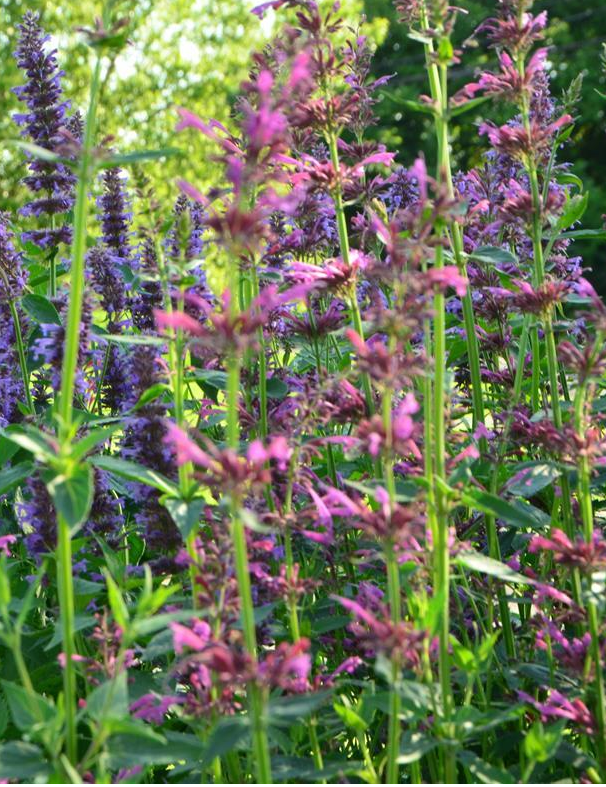 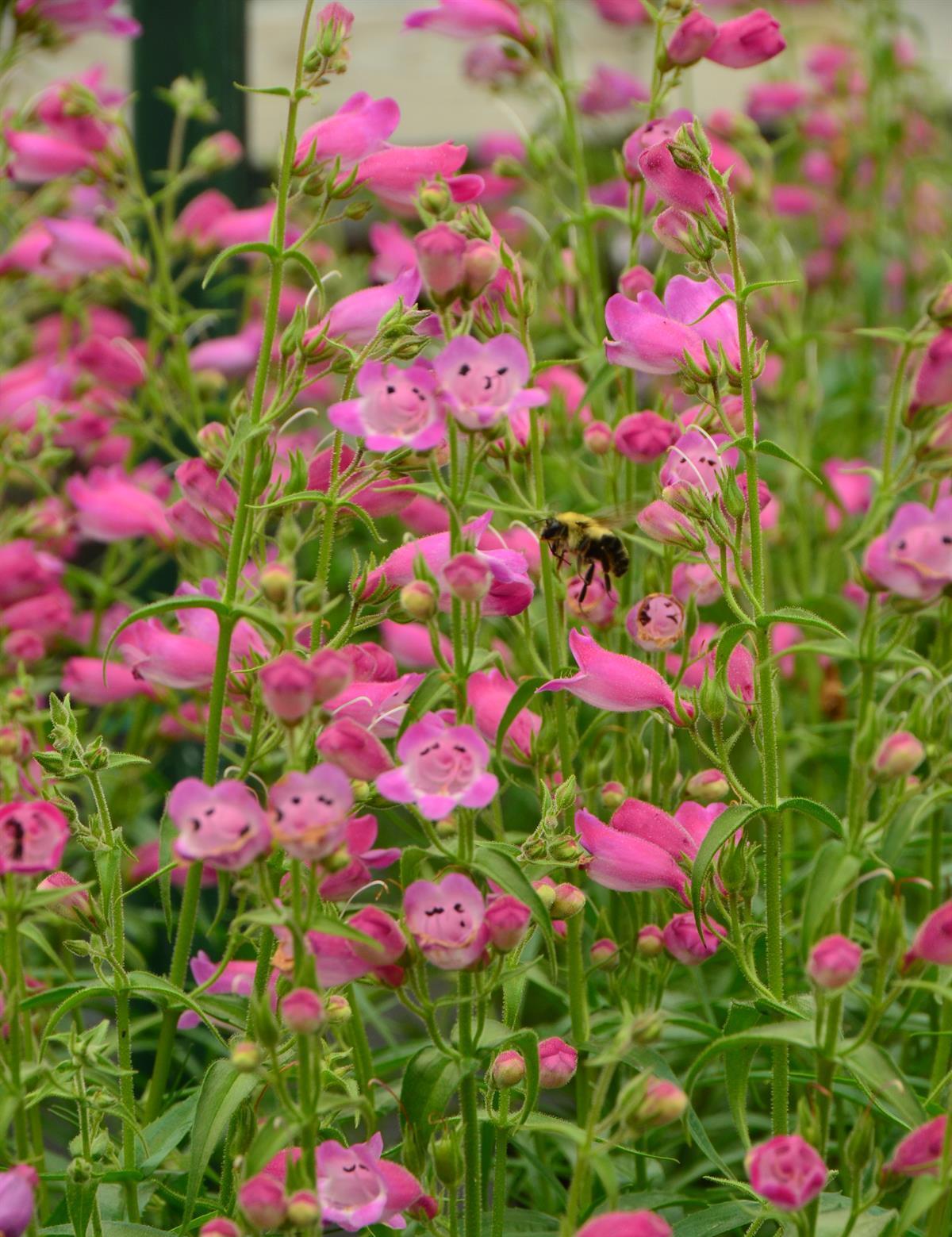 
Blue, pink, raspberry, and melon flowers all all summer to frost. Good plant for many pollinators. Height 24" to 32".
A member of the mint family. Foliage is fragrant.
Full sun prefered.
BEARD TONGUE
(Penstemon)


Red, pink, and lavender, and magenta blooms  June to August. Many crosses, many shapes. Good plant for may pollinators.
Height 12" to 24".
Full sun.